The suburb of Wongawilli was gazetted by the Geographical Names Board in 2005, however, as a region it has a long and diverse history.

1815 was the year that the Europeans originally came into the Illawarra and within thirteen years the lands in the  Wongawilli region were granted to the early European settlers. The lands were cleared and used for mixed farming.  The factory based dairy industry did not emerge until later in the nineteenth century.

Mining was to contribute to the major growth of the population and the settlement at Bankbook Hill (pictured) was typical of the unplanned villages that sprang up around mining enterprises throughout Australia at the time. As the mining community grew, the mine owners dedicated land to the first church and Wongawilli Public School, that was opened in 1928. The original location of the school, at the corner of Smiths Lane and Wongawilli Road indicates that the population was expected to extend along both roads.

The Wongawilli settlement that exists today, developed from a parcel of land owned by the mine owners in 1936. It  comprised 25 lots, 8 of which already had houses constructed on. The parcels of land differed in size and this possibly reflected the status of the miner seeking a home site. Not all of the parcels of land went to the mining community with eight being purchased by non miners. Houses were either built in situ or were moved from surrounding areas, for example, from the vicinity of Jersey farm road when the coke ovens were being constructed. The mine still operates today. 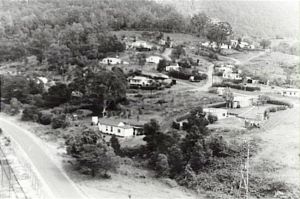