William and Elizabeth Rose purchased “Fry’s Hill” in 1862 and it remained in the Rose family ownership up until 1903.

William Rose was born in Wiltshire, UK and was sent to Sydney as a convict, to serve a life sentence for highway robbery. Rose was given a ticket of leave in March 1844 and he married Elizabeth Harris in April of that year. William and Elizabeth had a total of 13 children.

It is thought that the Roses first occupied the original house built by the Fry’s. During their time there they had the present homestead constructed, around 1890.  Throughout the Rose’s tenure evidence suggests that the property formed one of several parcels farmed by the family, principally for the purposes of dairy farming. William died on 15 June 1894 and Elizabeth was to follow him two years later leaving the farm to Joseph Samuel Rose.

It was during the ownership of the Rose family that the name “Coral Vale” was first used in relationship to the current property. It is thought that the name derived from the number of coral trees that were established by the 1890s. Supporting this, it is known that when Henry Carroll Rose left the Illawarra to reside on the Richmond River, he took coral trees from Coral Vale at Wongawilli and named his new farm “The Corals” 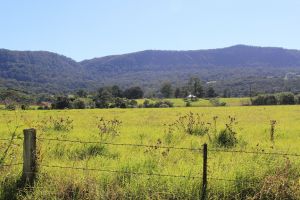