William Smith, born and raised in West Dapto, he purchased Coral Vale at the end of 1903. At the time of acquiring “Coral Vale”, William Smith owned several other portions of land including part of the lands that formed “Spring Hill”.

William and Mary Smith’s (ne Prior) son, William James inherited the Spring Hill portion whilst their other son Edwin Leslie inherited the “Coral Vale” portion. Edwin in a few years went on to double the size of the land holding and by 1938 “Coral Vale” had reached the size the land was to reach until 1989.

Bruce Prior Smith was to be the final owner in the Smith line. Operating “Coral Vale” as a dairy farm, he was after 11 years of negotiation with Wollongong City Council able to subdivide the property into 6 five acre and one 17 acre block of land. The balance of the lands were sold to Imilac Pty Limited in 1989, the year the Smith family left for Wagga.

Imilac Pty Limited, Buddhist Association of Australia was to eventually sell the property to Sheargolds. 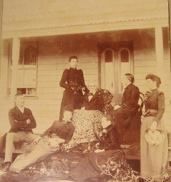